Join over 400K Canadians for a day of ceremony and reconcilliation

Take a tangible action to end gender based violence in Canada

In many Indigeneous cultures on Turtle Island, Moose Hide is considered medicine. Our pins are like a medicine for a social ailment in our society.

Each pin sparks 5 conversations and brings the social ailment into the light.

Bring the campaign to your college or university

Bring the Campaign to your K-12 school

Become a champion for the Moose Hide Campaign

The Moose Hide Campaign began as a BC-born Indigenous-led grassroots movement to engage men and boys in ending violence towards women and children. It has since grown into a nationwide movement of Indigenous and non-Indigenous Canadians from local communities, First Nations, governments, schools, colleges/universities, police forces and many other organizations – all committed to taking action to end this violence.

The campaign is grounded in Indigenous ceremony and traditional ways of learning and healing. A cornerstone of the Moose Hide Campaign is the moose hide pin. Wearing the pin signifies your commitment to honour, respect, and protect the women and children in your life and speak out against gender-based and domestic violence. To date, over three million moose hide pins have been distributed free of charge to communities, schools, and workplaces across Canada.

Moose hide is a symbol of taking a stand against violence and undoing the effects of Residential Schools.

Co-founders Paul and his daughter Raven were hunting moose to help feed their family for the winter and provide for cultural purposes. This was a grounding tradition on their land that passed knowledge from one generation to the other, something the residential school system tried to erase.

They felt connected to their surroundings within their Carrier territory along the Highway of Tears in Northern BC where so many women have gone missing or been murdered. And they were inspired.

Paul knew his young daughter deserved a life of dignity and respect free from violence.

And so it began… a cultural tradition of generational teachings became a symbol of a responsible, meaningful pledge.

A commitment to take action in honour of women and children everywhere, and a symbol of honouring Indigenous medicine and belonging that is here to stay. 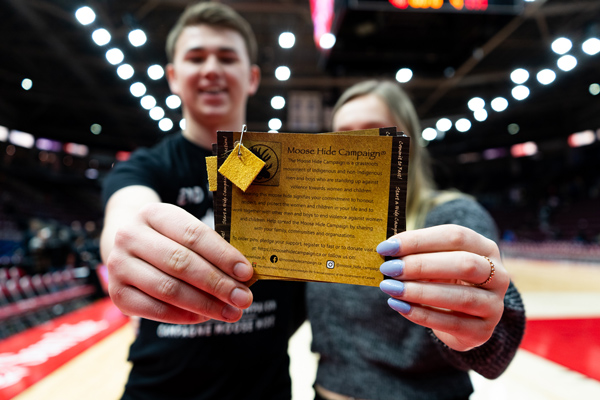 Expanding on the issue of violence against women with Verna McGregor